Today I am left with much reflection and have found myself reminiscing through past events. While most people are waking up with a hangover and alcohol in their system from the night before, I am waking up sober. I do not have the taste of alcohol in my mouth or the smell of it on my breath and I do not have a headache or the urge to lay in bed any longer. One thing that stands out to me is that rather than neglecting to open the curtain to let the sun through, I have found myself witnessing the beauty of it as I have opened the curtain this morning and it's shine has graced my living room.

A new day awaits me, different from yesterday, the day before and the ones further beyond that. What will today be like for me? And how will it progress to tomorrow? Many thoughts surround that because today is an anniversary day for me. The day that I took ownership of my life and began to make better decisions for myself. To walk the red road and to live a better life.

Seven years ago today I made a commitment to myself that I didn't want alcohol, steroids or drugs in my life anymore. Throughout those seven years many challenges have come, many people have exited my life and much has changed. I no longer have the want to be around a party environment, nor the urge to meet up with a site van to receive needles. I make it clear to others that it is not for me and if they disrespect that then I defend myself. False friendships have been removed, stronger bonds with my family have been made and today I make healthy choices for myself and give thanks for this gift of life.

Having a healthier relationship with myself and my family is something that I thank Gitchie Manidoo (The Creator) for. They have been my strongest support system throughout this journey and have been there throughout it all. From the nights of mischief, acts of crime and violence, to the mornings of not remembering and trying to puzzle it all back together, they have been there. Most importantly was the morning after hitting rock bottom with my suicide attempt and the day I said that enough is enough and began to walk the road of sobriety.

Friends come and go but family always stayed for me, which is a blessing considering all of the things I did when I was drinking and using. I always heard my dad tell us stories of his experiences and yet I still went to figure it all out for myself. Often a night of drinking would result in events that were quite traumatic for me to witness due to the actions made by the individuals I surrounded myself with and the pressure to be included in those actions. From violence behind closed doors to the violence in city streets, to the drug dealing and drinking during late nights spent in trap houses, I found myself thinking that I didn't want this anymore. Driving under the influence became a regular thing too which was not smart at all and certainly wasn't safe for myself or other people. Eventually I came to the realization that this lifestyle was going to validate what teachers had told me in high school, that I was going to either end up "dead or in jail".

When I had been using steroids it was initially to become more attractive due to being called ugly, not good enough and having people make fun of my body image which lead to insecurities. It hurt when guys did it to me but when women would, it stung and made me feel inferior. I remember drinking while using steroids and I was very emotional, aggressive and always ready to fight, which is something that the dealer neglects to tell you will happen when they sell you them. Changes in my body also occurred, including acne on my chest which had left scarring that will be with me for the rest of my life.

After seven years I reflect on how many people were hurt, how much chaos was in my life and how finding balance has lead me to making amends with both myself and those that I was destructive towards. Not knowing who my blood relatives were for 25 years due to my father being adopted in the 60's, being bullied in high school for being Indigenous and being lost in this world which lead to being involved with gang life played a big part in the trauma that I carried. The reality is that even though I am sober, I still cross paths with people I have hurt and have had to make amends. Taking ownership of my actions and knowing when to apologize is a part of the healing process. Some of the amends made are due to actions that happened when I was sober and learning how to cope with emotions that weren't present before. Making amends with myself was important too and I often remind myself that when the going gets tough, to be gentle with myself.

Finding and learning my culture throughout these years has helped me throughout my journey and going to sweat lodge has helped as well. Being able to learn my language more and gain cultural knowledge and teachings has gone a long way. I've been able to pass it on to my family members and we have shared it together. This was something that we did not have growing up but being able to have it now is important to me and is something I give thanks for everyday.

The teachings I received from my parents played an important part in who I am today as well and I choose to share them with others when able to. My mom was renowned for bringing people together and offering kindness to others but if you crossed her then you would know that you made a big mistake. She taught me to offer kindness and to have a kind heart. My mom also taught me to not take crap from anybody and to stand up for what is right too. My father also taught me to be kind to others and showed me what it meant to be a kind man through how he treated my mom. He prepared me for this walk of life and the challenges that it would carry for me but was also there to lift me up when I lost myself. Paying it forward has become something that I do often now and my father taught me a valuable teaching that comes with that, which is that service is gratitude in action.

With my mom passing away in August of last year and her birthday coming up next weekend I have had a lot to think about lately, in particular today. She was always there to give me hugs when I needed them and to listen throughout my hardships. Now that I am living my dream, she had always been there to support me throughout the process of being able to and was so proud of everything that I am doing. Hearing that she was proud of me affected me in many ways and often brought me to tears because of everything I have been through in my past and how she knew more than anyone. I know that my mom would also be very proud of me today for making it to seven years of sobriety and while carrying that close to my heart I will continue to live a healthy lifestyle.

While most people choose to drink alcohol and it has become a social norm, I acknowledge that I have no need for it in my life. This is both for personal reasons but also on a bigger spectrum. Hearing when people try to portray the "Drunken Indian" stereotype, I remind them that there are sober Indigenous people in this world. I've taken a strong stance against something that had been used to weaken our people and providing help to those that are still battling it as well as their own traumas.

Working on my craft and developing my writing skills more has been my outlet throughout all of this as well. Having released my first full length album "Mamawi" on November 1, 2017 and now almost completing my second full length album set to be released in summer 2019, my life is where I want it to be. Music has been one of my three keep safes, the two others being walks outside and exercising at the gym. These practices have helped me continue to keep going and I found have others along the way.

My experiences have given me perspective and have allowed me to become the man I am today. They have allowed me to speak and provide help to various people in various spaces across Canada and to the United States. My sobriety has allowed me to live my dream and to find my voice, my passion, my emotions and overall my true self. As of last year I had received my first regalia and this year in honour of 7 years on this red road and in honour of my mother, I plan to begin my journey as a men's fancy dancer.


Seven years ago today, I made the best decision I could make for myself. To live mino bimaadiziwin, to live the good life. 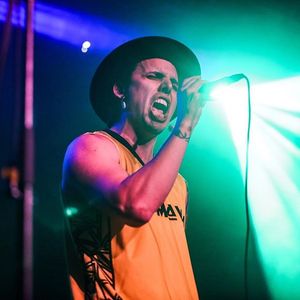